And I thought my life was uneventful.

Last Friday, I was invited by Tony Levin to attend the final run through of the Peter Gabriel show. Robert Lepage is once again the creative director so the rehearsals were taking place in Quebec city.

It’s strange to think that ten years ago already, Tony invited me to the same spot for the rehearsal for the Growing Up tour. Now this concert series is celebrating the 25th anniversary of the release of So and the theme, Back to Front, is using a mirror image of the So “logo” from the original release. It looks like oZ at first glance, which is kind of ironic because to me, it felt like a return to Oz. 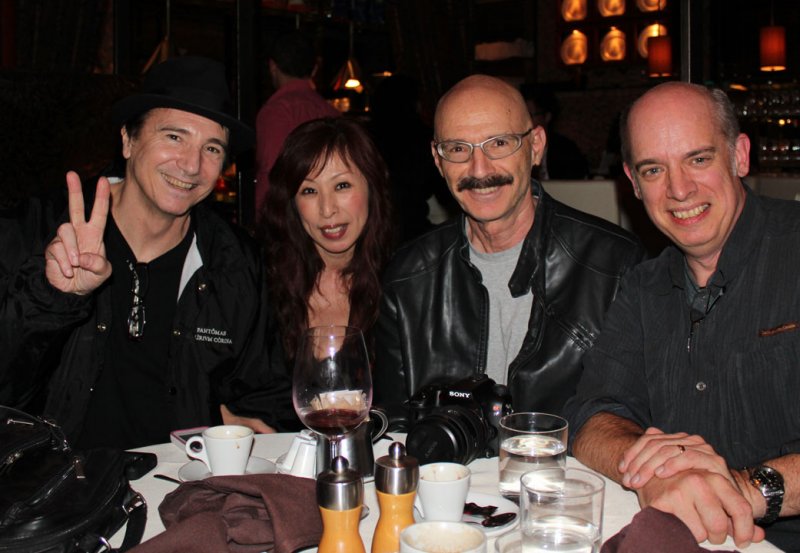 Thanks to Tony, I had an opportunity to (almost) literally peek behind the curtains in the Wizard of Oz. Unlike the book however, there’s no disappointment in what is to be discovered there. To some, it might take the magic out, but from my point of view, it only adds to the experience to watch the set being worked on and the kinks being ironed out. Needless to say, the run through was great fun and apart from a few glitches (a problem with a shaker loop for instance) it was spot on. They where still playing every song they rehearsed at this point to see what worked or not and the 2:30 hour show that we saw was to be  trimmed down in the final version. Of the song that where cut was a neat version of Games Without Frontiers and Humdrum.

While at breakfast in a Quebec restaurant the next day, I ran into Terry Bozzio. It really surprised me he remembered me as we haven’t spoken since I did the BoMo CD cover for him and Pat Mastelotto nearly 10 years ago. (10 years again? Is there a pattern here?) As luck would have it Terry was doing an appearance for Sabian in the city and could free himself to join us in the evening. Ever the storyteller, the man entertained us with many Zappa anecdotes.

Next, more from the land of Oz at the Quebec and Montreal shows…