In writing the liner notes for the new EP, I realized that most musicians involved in our Specimen13 project is playing a variation of the Touch Guitar. The list?

Mart and I used the NS Stick quite a bit for our demos, but not really for the final recordings. With these guys around…

I fell in love with the instrument when I first heard the Peter Gabriel 3 (Melt) album at a friend’s house. Sonically, that record was the biggest kick in the pants I received since I heard Strawberry Fields Forever, years earlier. I was stunned. Literally. There were those weird gated drums (before they became THE 80’s cliché) but there was also that peculiar bass tone played by Tony Levin. The second time I heard it was from Tony’s playing (again) on the classic King Crimson LP, Discipline (Elephant Talk is a good example). From then on, I was hooked!

But as most people I know who play the instrument has to answer the “What-the-hell-are-you-playing” question on almost every gig, here’s a primer for those who are unfamiliar with it.  (Full disclosure: Wikipedia helped a bit on this one).

Touch guitar is a name used for a variety of musical instruments of the guitar family which usually has eight, ten or twelve strings and is designed as a fully polyphonic chordal instrument. The player utilize a fretboard-tapping playing style (hammering onto the strings with their fingertips) in the same way that one would strike a piano key. The technique is very similar to that of piano in as much as the player covers both bass and melody notes together with both hands and each note is struck with one finger of one hand. Typically, one hand plays the melody on the treble strings and the other plays rhythm on the bass strings.

Prominent examples of touch guitar include:

The Chapman Stick (the Stick) is held via a belt-hook and a shoulder strap. The instrument then settles into a position which allows both of the player’s hands to naturally and comfortably address the fretboard.  Tony Levin was an early user, and was playing the instrument from the mid-1970s: he would bring it to a high profile with Peter Gabriel and King Crimson.

The Warr Guitar, played by Trey Gunn, is also designed for two-handed tapping technique, but more traditional guitar or bass guitar techniques (like strumming, pizzicato, slap and pop or using a plectrum) can also be used. Because of the placement of the instrument’s strapholders, the Warr Guitar may be played in a more upright, Stick-like position, or horizontally, like an electric guitar.

The most recent addition to the family is the U8. Markus Reuter has played a Chapman Stick, a Warr Guitar in his work with Centrozoon and Tuner (as well as on his solo recordings). Ever the perfectionist, Markus has designed his own Touch Guitar and has made it available on his site. Markus and Alex Dowerk have a few video demonstrations on the U8 site. 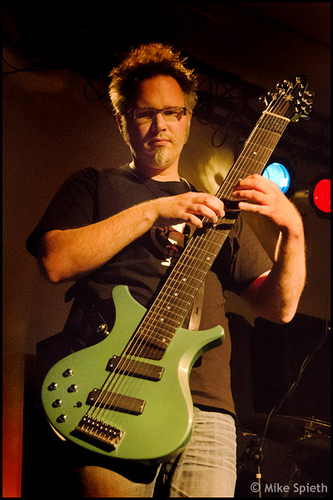 For more cool sounds from Touch Guitars, I’d strongly suggest you take a listen to  Stick Men (here playing Robert Fripp‘s Breathless), consisting of Pat Mastelotto on drums with Tony on Stick and Markus Reuter on his own U8 touch guitar .

Oh, and our own Specimen13 EP, coming out shortly. 😉

I forgot to mention this great presentation by Trey on “Original Voice”. Two nice solo performances are featured. Nice!