I’m old enough to have seen the first, or is it fourth, Star Wars episode in a cinema so this means I am part of that generation. I was disappointed in the second, er… the fifth, episode with Muppet Yoda and lost all faith with the release of the third, OK, the sixth instalment. Ewoks? Are you kidding me??

Alien is to me the movie that changed everything. 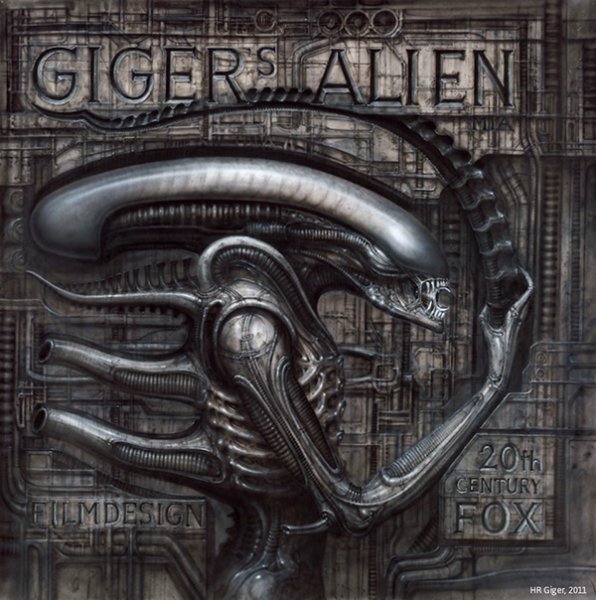 I discovered Giger only a few years before while I was perusing a friend’s record collection. With Tarkus as an exception, I was never a huge fan of Emerson, Lake and Palmer’s music, but the cover to Brain Salad Surgery was so strong it was to stay imprinted in my mind. It was a close rival to the unforgettable cover of King Crimson’s In the Court of the Crimson King. (Two albums featuring Pete Sinfield, Greg Lake and close up illustrations of faces. You figure this out).

Thanks to Giger, when the Alien movie was released, I felt it was a game changer at least as far as we were imagining science-fiction. Sadly, it’s Star Wars’ Disney cuddly cute vision that ended up becoming the standard. (sigh)

I guess that his art was so strange that it had to stay underground.

Giger’s art was still alive however and finding one of his too rare art books was always a joy. His output has changed a lot since those days of the Necronomicon and I have to say I lost interest even if I kept an eye on his bold moves into uncharted territory.

It’s only with this news hitting us today that I realize how influenced I was by his art. During the years I was working in “analog mode”, airbrush was never the tool I was comfortable with. It’s only with the advent of computers and Photoshop that, unconsciously, Giger’s influence resurfaced. I was unaware the “biomechanoid” had operated its mutation at the DNA level. Your are what influences you.

I now look at the digital art I’ve done for Specimen13 and the Maelstrom graphic novel and it is now obvious that I owe a great debt to the swiss artist. Only yesterday, I may have been the only one not seeing this.